We are delighted to announce that Panasonic is our latest Platinum Member company. We have been collaborating closely with Kato San and his team for a considerable period, and their work has been central to the extraordinary growth and activity of the OpenChain Japan Work Group. It is fitting that we are making this announcement at the tenth meeting of the Japan Work Group, just prior to Open Source Summit Japan, when community participants will have an opportunity to meet Kato San and his team at panels and workshops related to OpenChain.

“Panasonic operates across multiple key markets for technology. Consumer electronics, automotive and aviation all play a part in their deployment of software around the world,” says Shane Coughlan, OpenChain General Manager. “This is a natural next step in our partnership and it provides a significant boost to our goal of addressing critical markets like automotive and in providing open source compliance excellence to suppliers of all sizes.”

The OpenChain Project is delighted to announce that HELLA Aglaia, a German company focused on the automotive space, is the latest OpenChain Specification 2.0 conformant company.

“HELLA Aglaia entered the OpenChain community via the OpenChain 1.2 conformance process earlier this year,” says Shane Coughlan, OpenChain General Manager. “We were delighted with a productive, efficient collaboration, and equally heartened with their decision to take a leadership position in the adoption of OpenChain 2.0, the version of our standard positioned for fast-track submission to ISO. OpenChain is gathering particular momentum in the automotive industry due to the initiative and pursuit of excellence of such companies. We are looking forward to building new bridges to an ever wider group of stakeholders.”

Thanks to the hard work of our friendly contributors, Denis and Yegor, the OpenChain Specification 1.2 has an official translation in Russian. This translation joins our growing corpus of localisation documents for our international community.

The OpenChain Project hosted a Steering Committee meeting on the 19th of July as part of a wider OpenChain Workshop. This Steering Committee meeting provided an opportunity to review and raise comments around the ISO draft of our Specification. No votes were taken at this meeting, with the focus primarily on ensuring people had a chance to review the document, and with the discussion moving onto our mailing lists subsequently for more formal review.

The Education sup group is working on additional material for our reference library. The following material is being edited: 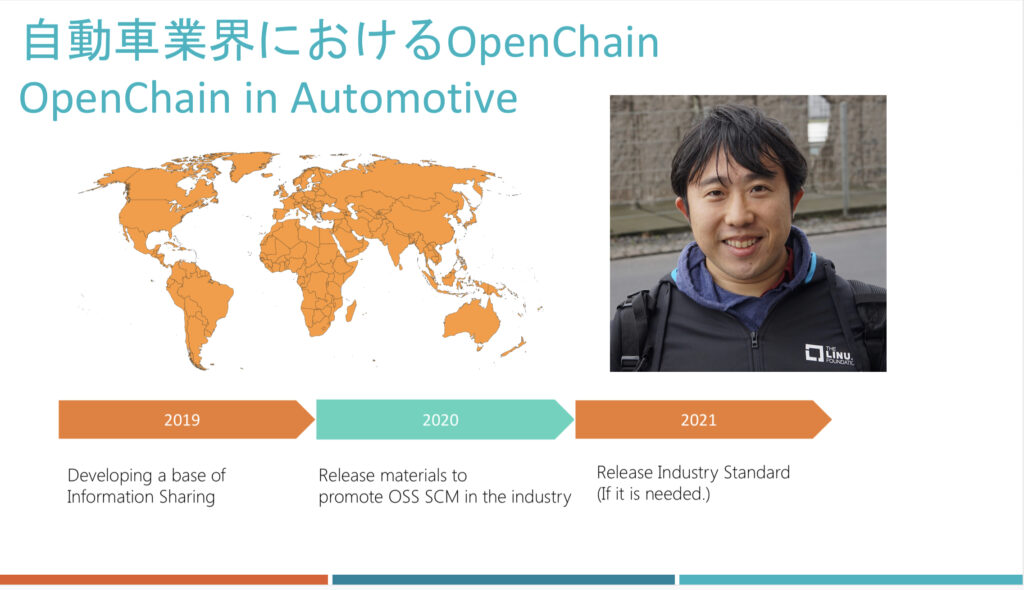 On July 24th the OpenChain Japan Licensing Sub Group held a meeting at the Olympus office in Shinagawa, Tokyo. The focus was on reviewing an English version of the OpenChain supplier education leaflet for review and discussion. Learn more:

On July 25 the OpenChain Project announced the launch of our global Tooling Work Group. This work group, chaired by Oliver Fendt of Siemens, will see contributors from Siemens, Bosch, Toshiba, Fujitsu, Hitachi and many other companies accelerate collaboration around open source tooling for open source compliance. Learn more:

Wang Mingyu from Fujitsu is not exactly part of the Japan workgroup, but she is a member of Asaba-san’s team. She hosted a talk entitled
‘Dandified Way to Package Management in Yocto Project.’ Her talk referenced the OpenChain Specification as a solution for real world process management.

News came in that Bird&Bird hosted an Open Source Program seminar on the 25th June 2019 to explore the cutting edge in Open Source Program Offices in Europe and beyond. The opening keynote was delivered by Amani Hajj Ali and Fabienne Haag from SAP, explaining how their company’s outbound process remains transparent and agile through the use of a standard like OpenChain. There was a group discussion focused on how OpenChain supports leadership position in open source management. Learn More: