This month is all about the OpenChain Specification. We are approaching a new release and are seizing the opportunity for reaffirming the core text and goals of the project. At the same time we are seeing new interest and engagement from both technology stakeholders and those from further afield. Speaking of further afield, we just released some milestone curriculum material in Simplified Chinese under CC-0 licensing (effectively public domain). See below.

The OpenChain Project has developed a specification that defines a core set of requirements that a quality FOSS compliance program is expected to satisfy. Although it represents a minimum set of “must have” requirements, a significant degree of flexibility is given on how an organization might implement them. OpenChain Conformance helps to reduce concerns about open source compliance in organizations of all types and sizes.

We update the specification periodically based on feedback from our community. At the moment we are in the home stretch before releasing version 1.2 in April. This release does not change the requirements of the specification but introduces improvements to language and definitions to make OpenChain Conformance and translations easier. We are seeking public comments as we wrap things up.

Everyone is invited to make their voice heard before we conclude public comments on the 15th of April. You can review the latest draft of the OpenChain Specification – and see what has changed on page 3 – by heading to this link:
https://wiki.linuxfoundation.org/_media/openchain/openchainspec-1.2.markup.draft.pdf

If you want a “clean” version of the current draft you can get it here:
https://wiki.linuxfoundation.org/_media/openchain/openchainspec-1.2.draft.pdf

We welcome any and all feedback from all parties. The easiest way to provide such feedback and to get involved in the conversation is to mail our Specification list:
Openchain-specification@lists.linuxfoundation.org

Feel a little out of your depth? You can get a better understanding of how the specification was developed and what its goals are right here:
https://www.openchainproject.org/specification-faq

One of the first announcements coming up, and our first case study, is being arranged with Code4Health, a project of the English National Health Service and National Health Service Digital. We expect to formally release the case study and announce their conformance by the end of this month. Meanwhile, Code4Health – the first program inside the NHS to conform – is already Tweeting: 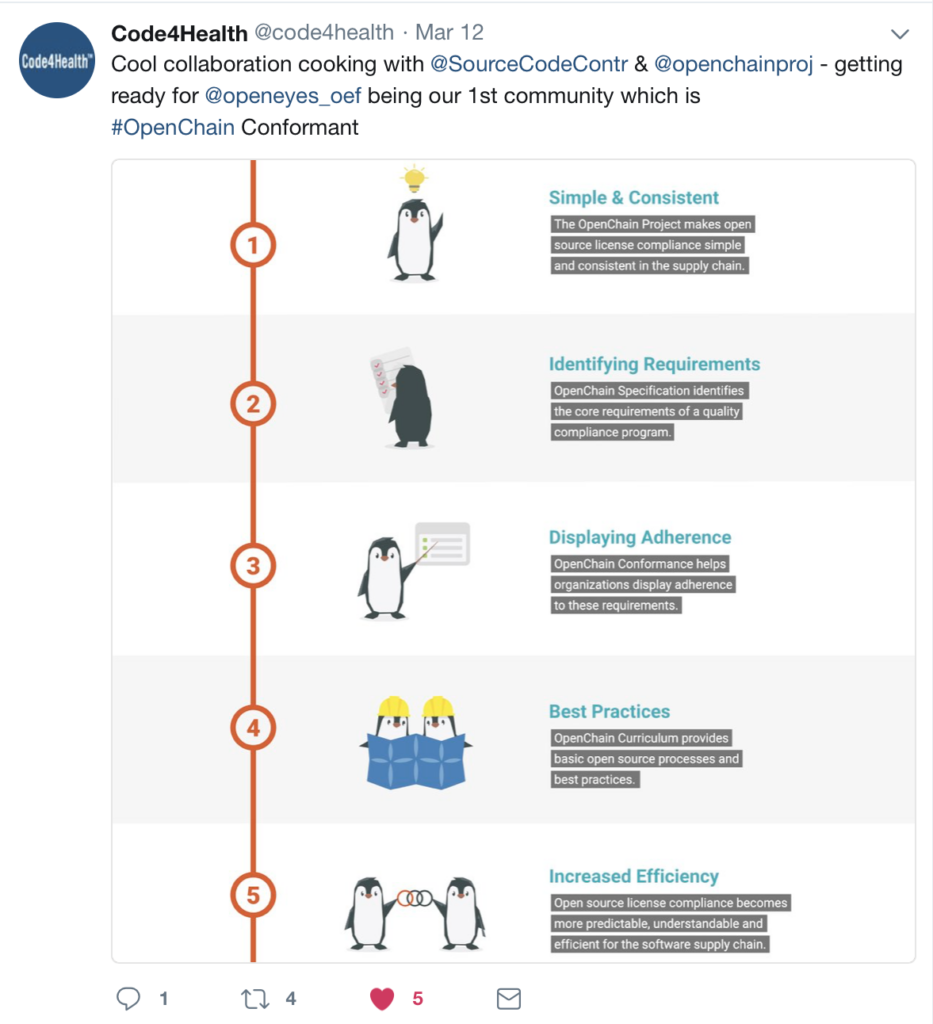 We have completed some interesting event outreach during the early part of March. One of the most notable was a workshop held in partnership with the Open Culture Foundation (Taiwan) on the 5th of March, an event that fits neatly into our Asian outreach priorities. A few points became clear:

One area of useful feedback was that some attendees asked for future events to be held in Hsichu or Neihu so that their colleagues can join. Some may be able to offer a meeting room at their offices. Our colleagues at the Open Culture Foundation are exploring the opportunities and may hold another workshop in April or May.

OpenChain Project held a governing board meeting, a face-t0-face and a standing room-only talk at the Linux Foundation’s Open Source Leadership Summit in Sonoma. This event was a great chance to reconnect with many of our core constituents and to personally engage with some potential new contributors.

For those of you who are new to the project, our governing board consists of representatives from our 14 Platinum Members, and it meets once every quarter to discuss strategy. Their input ties directly into the activities of our Specification, Conformance, Curriculum and Onboarding work teams, each of which was represented or discussed during our open session. The OpenChain talk was delivered by Shane Coughlan, OpenChain Project Director, to the general Leadership Summit audience. It was interesting to note the level of engagement and questions fielded by the audience. It highlights both the amount of interest there is around improving compliance and areas where we can usefully focus on developing new onboarding or reference material.

The OpenChain Project has some forthcoming events that may be of interest to our readers:

Keep track of all our events here:
https://www.openchainproject.org/events

The OpenChain Curriculum slides are now available in Simplified Chinese. This is a significant milestone in sharing useful open source compliance information with a key target demographic. Great thanks are due to Hung Chang and Navia Shen for initiating the OpenChain Simplified Chinese translator team, to Lucien Lin for creating this translation, and to Florence Ko for review.

Get the slides in PDF, PPTX and ODP formats here:
https://github.com/OpenChain-Project/Curriculum-Translation-zh-Hans

The next month will be all about case studies, reference material and expanding the community of conformance. Not to mention the formal release of the OpenChain Specification 1.2. Stay tuned and feel free to join any of our work teams at any time. You insights always help make us better.